Laurent Bibard, Dr-Prof. of Philosophy and Management at ESSEC Business School, author and spokesman on complexity, draws upon the work of the philosopher Kojève to understand the rise of populism in Europe and the bigger picture.

The elections held this year in Europe, in which EU member states elected their national representatives to the European parliament in Brussels, saw a fresh wave of populist, anti-EU parties win a majority of seats which, on the map of Europe, looks very much like a geographical slash of the sword – horizontally from darker blue France through to Austria and Hungary and vertically, lighter blue, from Sweden down to Italy. Add the Brexit Party landslide in the UK and one might very much think it is the “End of History” for a united Europe.

For Professor Laurent Bibard, the term End of History is chosen purposefully. And with a figurehead clearly in mind. That of Alexandre Kojève, a Russian-born French philosopher who in a series of seminars from 1933-39, brought Hegel to France and in doing so formed the French intelligentsia who were to shape much of after-war French and European politics: Bataille, Lacan, Raymond Aron, Simone de Beauvoir and Raymond Queneau among them. A wholly fascinating figure, Kojève worked as a high functionary in the Department for External Economic Relations (DREE) – contributing decisively to French international agreements, including the GATT – from 1946 until his death during a working meeting on the development of the European Union in Brussels – in 1968, where he is buried.

One world, no conflict

Studying Kojève, and indeed having written about him, Bibard sees a canny reflection of pre-WWII events with those of today, most notably in the rise of populism and the anger and discontent that political parties may draw upon to fire their ambitions of power. Kojève, writing in 1943 in a publication that was finally to see the light posthumously in 1981 (Esquisse d’une phénoménologie du Droit – Outline of a Phenomenology of Right), drew up all the issues linked to nationalist regression and concluded that countries would progress towards a world State either voluntarily or not. To reach this goal of one State, he thought that history would first have to pass through a stage of “empires” – American and Soviet – and he worked to be part of the building of Europe with a view to it being politically strong enough to constitute a third world power. His article L’Empire latin, written in 1945, gives us an interesting insight into this vision.

Prof. Laurent Bibard agrees with Kojève on one point in particular: that nationalisms are in effect regressions – temporary ones – in a process of globalisation that fundamentally continues and that globalisation is, moreover, unstoppable through history, even if it certainly does not consist in the current unilaterally economic liberal globalisation. Living in the times of the rise to power of Nazism, Kojève interpreted the phenomenon strictly as a nationalist step backwards before history and therefore doomed to failure. 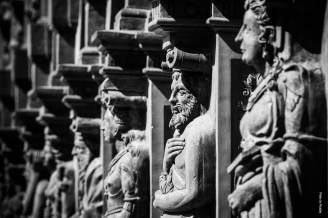 Hegel saw mankind drawing on an underlying unity and shared morality to find peace – the end of history – and Kojève drew on this thinking to build his own ideas of a unified Europe and finally a unified, globalised world, which he called the “socially homogeneous, and politically universal State”. For Bibard, however, the “End of History” is problematic. “Perhaps we shouldn’t even go in that direction!” he states, with irony. But he does see in Kojève and his work a message for Europe and today’s Europeans. “The canvas of Europe,” he states, “is a decisive culture in order to understand humanity as whole and its stakes. It isn’t so much a question of European bias to say this but fundamentally it’s drawn from the origins of European issues and concerns – both Greek and Jewish at the root. Europe has almost a duty to continue its work of constructing meaning, even if fragile.

Gender issues – a key to a solution

Kojève had a long lasting discussion on these issues with a friend of his, the philosopher Leo Strauss, who absolutely did not share his way how to understand History’s evolution. Leo Strauss insisted on the permanent existence of “eternal problems” which humans need to confront in their lives. Among these problems, for Strauss the political ones are the most important. And at the root of politics, are the sexes and gender issues which come with it. We may think that considering, with utmost attention, today’s gender issues, people may begin to find the right solutions to the political problems Europe is now tackling.

The Council on Business & Society Global Alliance is an international alliance between six of the world’s leading business schools and an organiser of Forums focusing on issues at the crossroads of business and society – The Council Community helps bring together business leaders, academics, policy-makers, students and journalists from around the world. Follow us on Twitter @_The_CoBS . Visit the Council’s website for a host of information, learning opportunities, and free downloads.